Facebook announced on last month that it is banning all the cryptocurrency ads present in their advertising network. Anything which is related to binary options, initial coin offerings, or cryptocurrency they will ban those advertisements. They also mentioned that this policy is a part to improve their integrity and security of the ads.

However, As reported by TheNextWeb there are some startup companies who are able to bypass the ban on the cryptocurrency ads. This is done by not using some of the words which the facebook ad engine identifies to ban those ads.

We see that companies and marketers in it have been modifying the words and are successfully able to run the advertisement on the facebook without the ban. This is done by changing the “cryptocurrency” word to “c-currency” and Cryptocurrency Trading” to “C-trading”. We can see an example screenshot below. 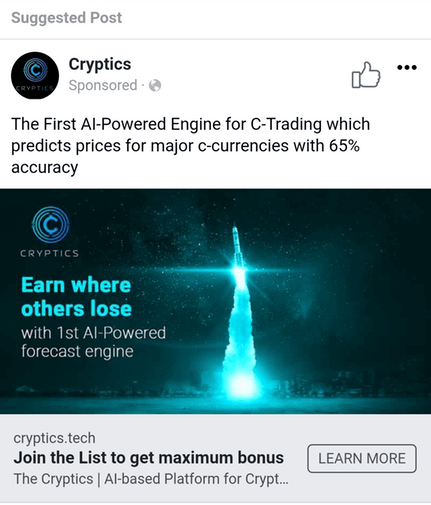 After the Facebook ban, we were still able to see some of the cryptocurrency ads because they had bypassed the facebook ad engine. but the news became viral and reached facebook and they noticed it and their company spokesperson told TNW that :

“We can confirm this ad was in violation of our policy and has been removed. Since announcing this policy our systems have been working continuously to better detect deceptive and misleading advertising practices; we realize enforcement may never be perfect, and so we appreciate you and our community reporting ads that don’t belong on Facebook.”

Let’s hope and see that after their new policy will their system be able to detect they misleading advertising. Comments below to let us know what do you think about Facebook ad ban on cryptocurrency and ICO?