British IT hardware company Bladetec plans to build Britain’s largest Bitcoin Mining Farm, according to a report in The Telegraph. The project is currently still in the planning stage. However, investors can now register for shares in the company and thus engage in Bitcoin Mining.

Bladetec is reported to be planning to build a 10 million pound bitcoin mining farm (approximately 14 million US dollars) over an area of 10,000 square meters.

The company, which has been running since 2002, called The Third Bladetec Bitcoin Mining Company Limited (TBBMC). The mining farm is said to be built at three locations in London, Suffolk, and Surrey.

For the implementation of the project, the company will sell shares, which requires a minimum investment of 5,000 British pounds(7000 USD). The revenue will be used to buy mining hardware and pay the electricity, property and administrative costs.

The company claims that it has acquired cheap energy from wind power to cover much of the energy needs of mining farms. One bitcoin mining in the UK costs an average of $ 8,402 in electricity costs, according to a recent study. According to the company’s website, the entire Mining Farm is expected to produce 43 Tera hashes per second. Regarding the profit opportunities, Bladtec has published the following chart: 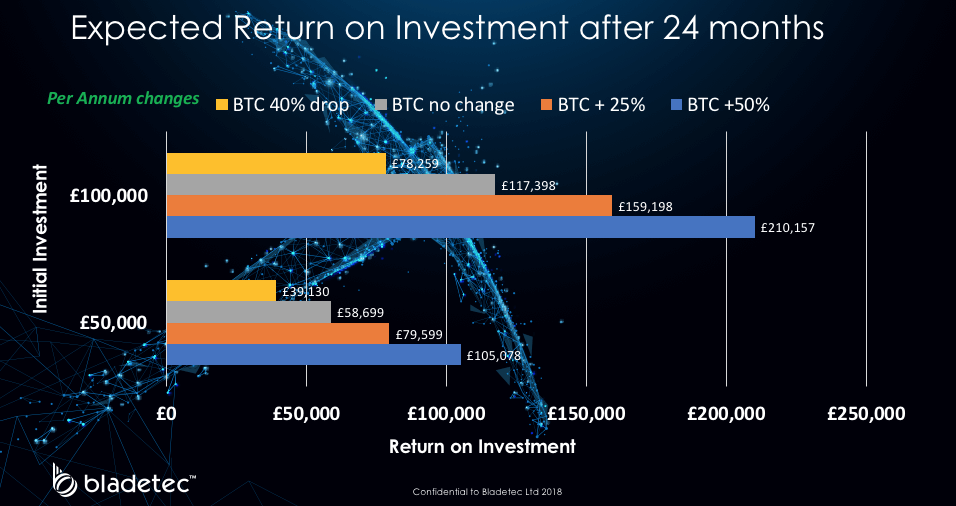 However, in an “executive summary”, the company also acknowledges that it is possible that the company could generate low revenue, for example, as the number of miners in the Bitcoin network increases.

Also according to the company’s website, Bladetec announces that it is the first Bitcoin Mining company in Europe to be based on Financial Conduct Authority (FCA) authorized financing.

The profits from the mining should be stored securely in offline wallets and lockers. In addition to mining, the company also plans to maximize shareholder returns by leveraging the volatility of Bitcoin. The net proceeds should then be distributed to the shareholders at certain intervals.