Coinsecure is the largest cryptocurrency exchanges running in India. Coinsecure is managed by CEO Mr. Mohit Kaira and CSO Dr. Amitabh Saxena. On April 9th 438.318 bitcoin worth 3 million dollars were stolen from the company’s bitcoin wallet.

As reported by bitcoin.com, Coinsecure filed an FIR complaint to the Cyber Cell, Delhi stating that they informed their CSO Dr. Amitabh Saxena that 438.318 bitcoins were stolen from their company wallet. The private keys were kept with Dr. Amitabh Saxena. And he says that the bitcoins were lost during the extraction of the keys for Bitcoin Gold. Now the team feels Dr. Amitabh Saxena is making a false story to divert their attention and he might have a role to play in this event.

Also, they mentioned in the FIR that Dr. Amithab Saxena has an Indian Passport so he might fly out of the country and requested the police to seize his passport until the investigation is over.

Two days ago Coinsecure informed its users by stating,

“In continuation of our backend updates, we request all users to stop depositing bitcoin core into Coinsecure’s addresses with immediate effect until further notice. We are currently working on a solution and will keep you updated when we are ready,”

Dr. Amitabh Saxena comes with a good background as he worked in Accenture and Hewlett Packard, and was a professor of Computer Science in Australia. Then in September of last year, he was appointed as the CSO of Coinsecure. He has also written many research papers on blockchain technology.

On April 12th Coinsecure announced on its website that:

“We regret to inform you that our bitcoin funds have been exposed and seem to have been siphoned out to an address that is outside our control. Our system itself has never been compromised or hacked, and the current issue points towards losses caused during an exercise to extract BTG to distribute to our customers.” 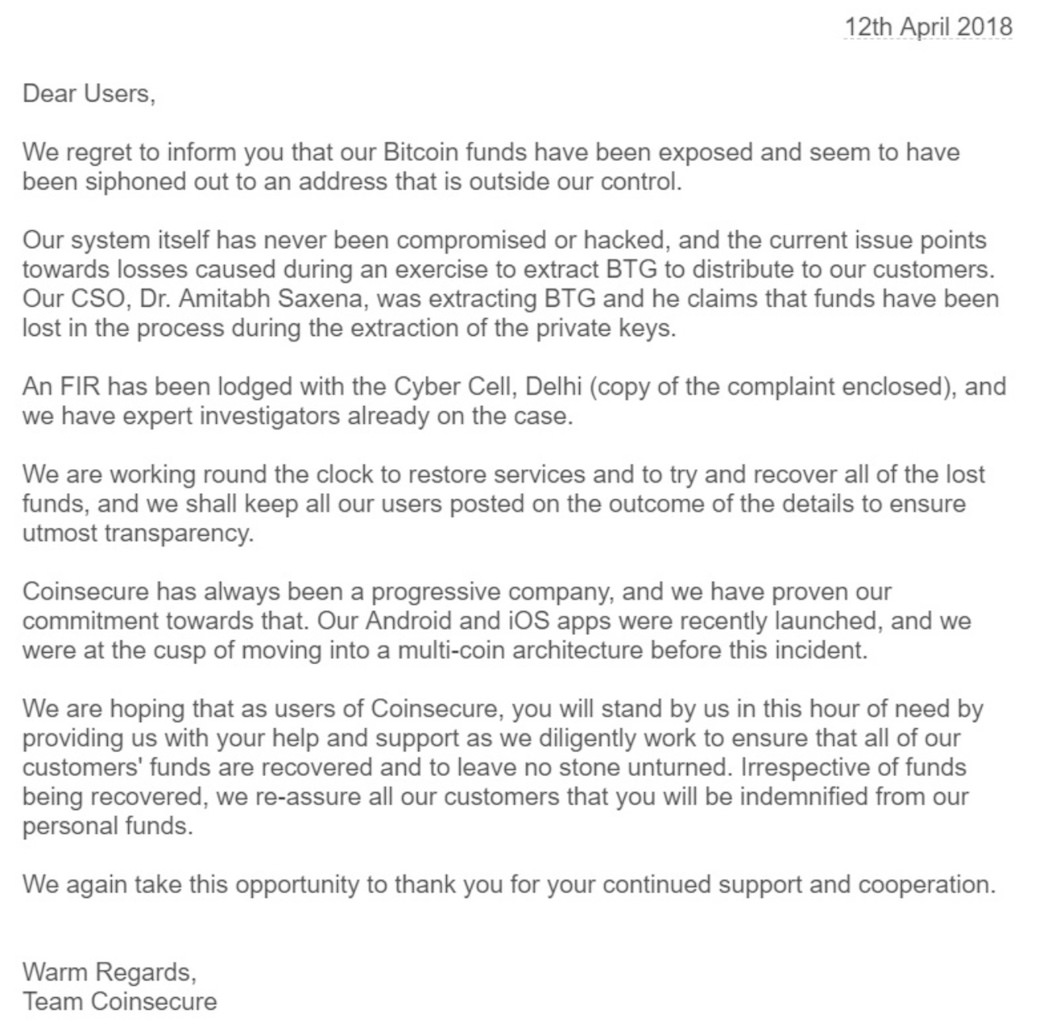 Coinsecure believes that this is done by someone from inside the company. But the reports point out to  “CSO, Dr. Amitabh Saxena, as he was extracting BTG and he claims that funds have been lost in the process during the extraction of the private keys. Let’s wait for the Cyber Cell to catch the person who has stolen the bitcoin.

What do you think about this incident ? is it Dr. Amitabh Saxena or someone from the company? Let us know in the comments below.