Talking about Bitcoin, the slowness of the network and high transaction fees have led to the emergence of scaling solutions such as SegWit, which consists of an update of Bitcoin software or the Lightning Network.

Vitalik Buterin was one of the first to point out the challenge of finding a scalability solution for Ethereum, and for this reason, he has said that the company is preparing to face these obstacles very soon. In this direction, Sharding technology has been the solution chosen to face this challenge.

As posted on social network Twitter, Buterin said that Ethereum is close to launching its sharding testnet. While Buterin did not offer a clear timeline, he said that Leeroy – a decentralized Twitter rival – will be a suitable option for this experiment 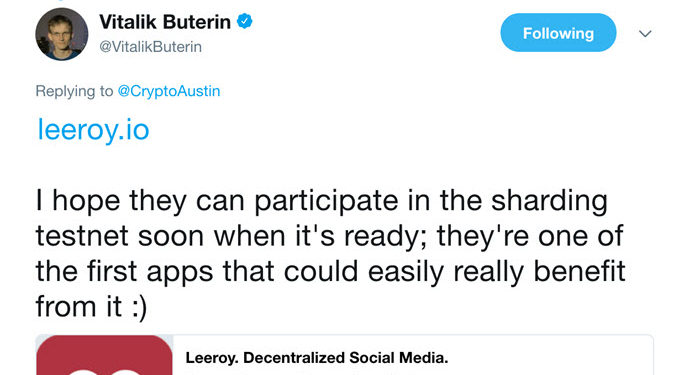 Together with the main developer of the network, Nick Johnson, Buterin has highlighted the importance that Sharding could have in the plan of the developers to pass from the  Proof-of-work to Proof-of- stake and verify transactions in the network

As reported earlier, Buterin spoke last November about the company’s intention to exceed the level of scalability of Visa in the coming years, mentioning Sharding as the main tool to achieve this goal. To elaborate more on this context, Visa processes about 1,500 transactions every second, while the Ethereum network processes only  between 10 and 30.

Under the current operation of Ethereum, each transaction must be validated by each verifier within the chain of blocks, which gives greater security to the network but also at cost of decreasing speed of the network. The change proposed by Sharding consists in dividing the network into small fragments, each with its own transaction history.

Unlike Bitcoin, Ethereum will not change the size of each block to improve its processing capacity, since developers believe that doing so is to centralize mining by having nodes that must run on increasingly sophisticated computers, such as supercomputers.

Therefore, the most intelligent approach for Ethereum has been to fragment the chain of blocks with Sharding, which will allow the performance of transactions processed in all the fragments to be greater than having a single fragment that executes all the work as it currently happens.

For the moment, it has not been clear how long this version of Ethereum will be implemented, enhanced by Sharding, however, developers agree that this solution would greatly contribute to improving the speed of transaction processing and avoiding congestion network.